On the weekend of 25 and 26 August 2018, Mattel and the Hong Kong Scrabble Players Association organised the Main event of the Scrabble Seventy Years Hong Kong Challenge in Lei Yue Mun Plaza. There are 5 divisions in total (A, B, C, D1, and D2) for Scrabble players of all levels. A total of more than two hundred players enrolled for the tournament. 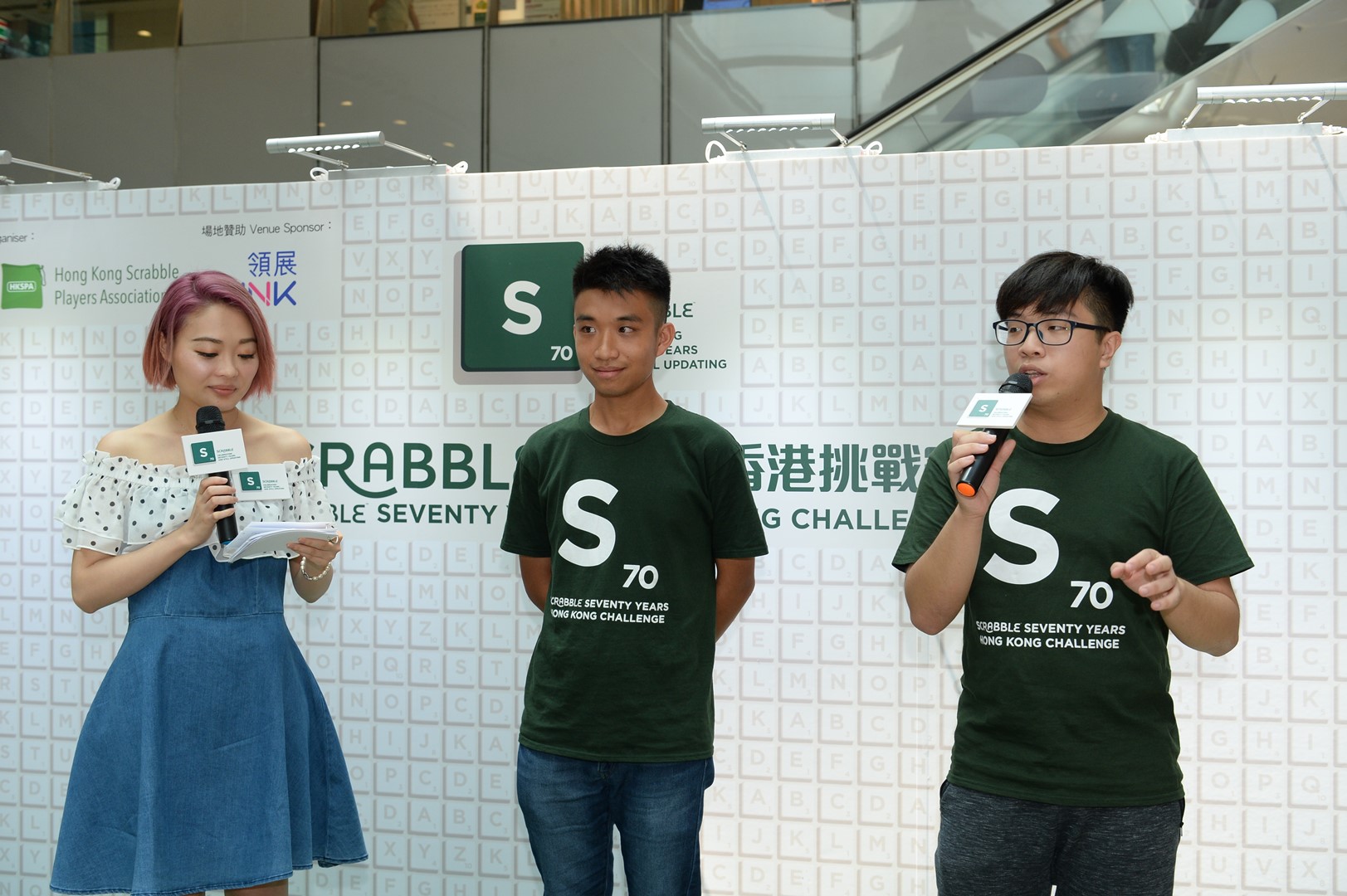 Chris LAU and Owen YIP sharing in the Opening Ceremony

The tournament, held to celebrate the seventieth anniversary of Scrabble, is the first one being held in a shopping mall in Hong Kong, and certainly one of the largest tournaments ever held in Hong Kong. All games were played with the Scrabble Seventieth Anniversary Edition sets. An opening ceremony was held, during which Chris LAU and Owen YIP, Co-founders of the Hong Kong Scrabble Players Association, shared how they made friends and improved their English language skills by playing Scrabble for the past 12 years. There is a free play area for passers-by to try playing Scrabble. Many spectated the tournament and tried playing Scrabble for the first time. 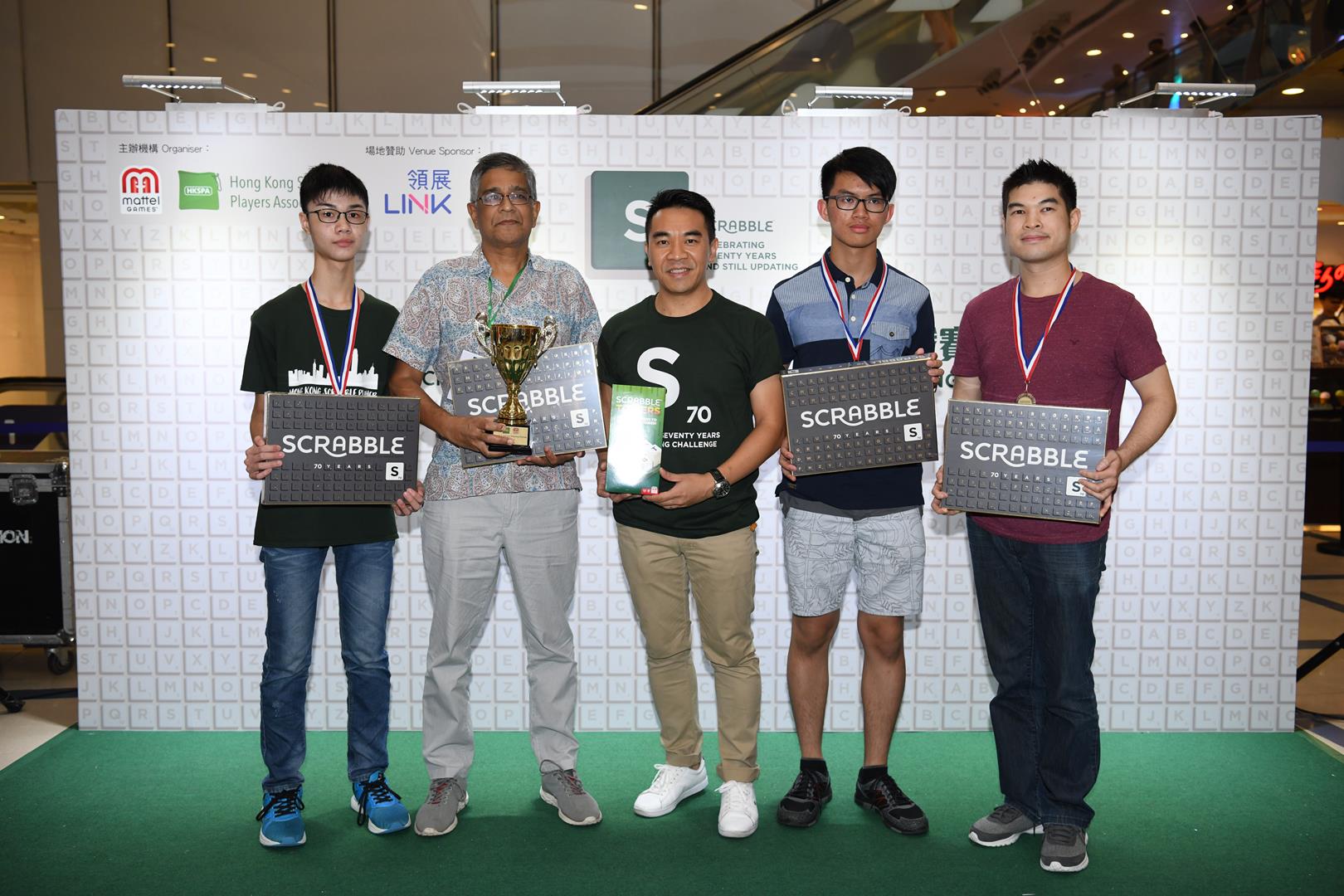 The players in Division A played a total of 15 games. Players representing countries other than Hong Kong include Gabriel WONG (Canada), Karen RICHARDS (Australia), Matthew HONG (Canada), Sanjoy GUPTA (India), Shaun DONNELLY (Australia), and Warodom GEAMSAKUL (Japan). It is Warodom’s third appearance in the Hong Kong Challenge tournaments, proving how amazing the Scrabble playing experience in Hong Kong is! In the end, Sanjoy GUPTA from India was crowned the Champion with 13 wins. With a strong field of local and overseas players, Sanjoy only managed to secure his overall win after defeating Brian PO (the only player who could still stop Sanjoy at that time) at the second last round. The 1st Runner-up goes to Brian PO (with 10 wins), a local youngster who got the “Most Improved Player” Award at the last WESPA Youth Cup in Malaysia. The 2nd Runner-up goes to Canadian Gabriel WONG (with 10 wins also), while the Best Performance Award (for players under the age of 16) goes to Thomson LAW Long Yin (with 9 wins). Karen RICHARDS, Chair of the WESPA Youth Committee, finished 4th. Carson IP and Euclid HUI, the only 2 players who have won the Hong Kong National Scrabble Championship, finished 5th and 6th respectively.

The other prize winners of the Main event are: 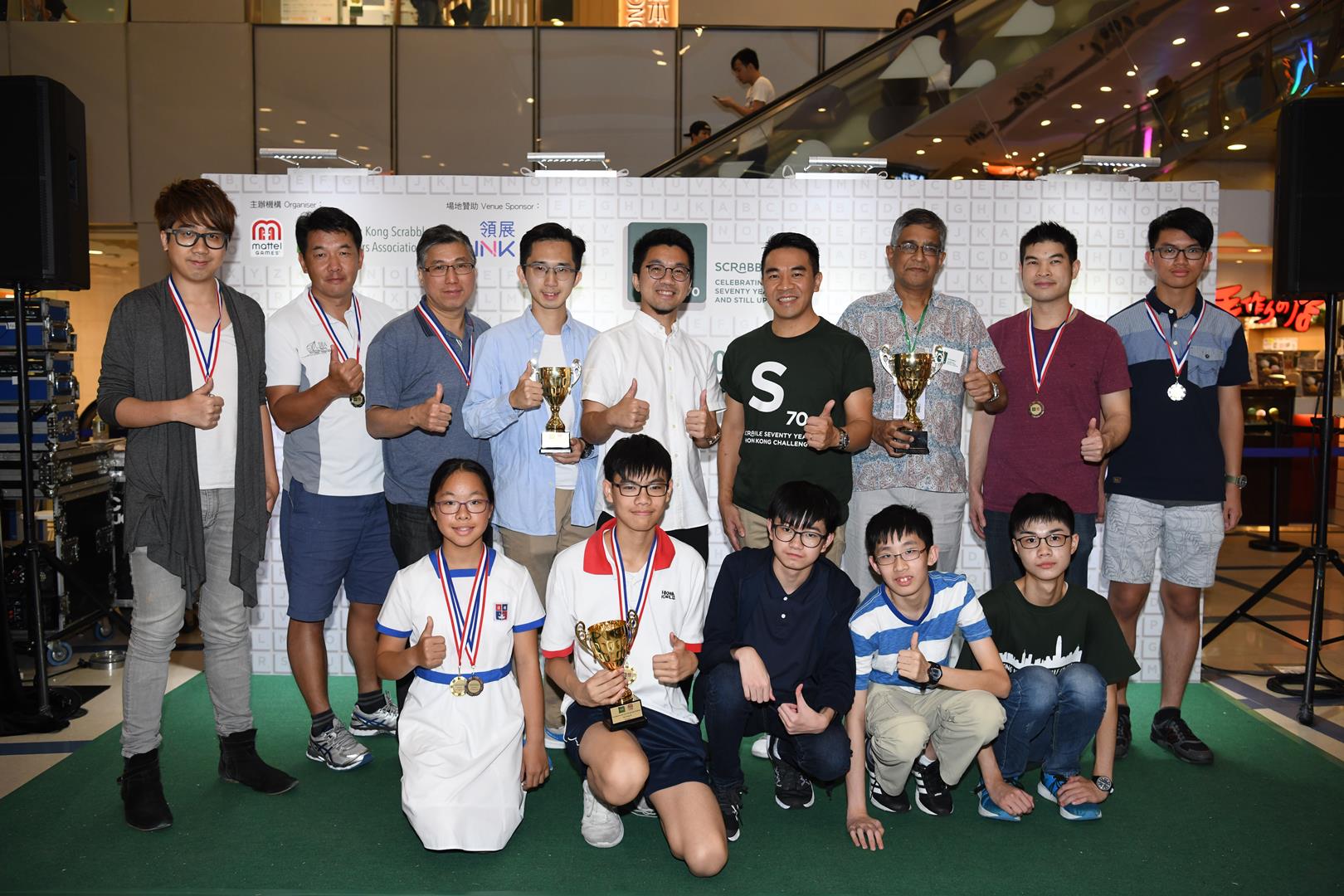 Group photo of guests and prize-winners

The full results of all divisions can be viewed at https://70years.hkscrabble.org/coverage/. Selected annotated games can also be found at the above link.

At the closing ceremony, Mr. Jones LEUNG, General Manager (Hong Kong & Taiwan) of Mattel delivered a speech and presented the prizes to the winners. Sanjoy GUPTA, who is the organiser of the WESPA Championship 2019 in Goa, India, also delivered a speech about the Championship and invited all local players to travel to Goa next year! A representative from LINK, the company that very kindly sponsored the venue, was also present to present the prizes.

On 27 August (Monday), the Extra tournament was held with participants playing 8 games of Scrabble. Thomson LAW Long Yin, with 7 wins, won the tournament. Karen RICHARDS got the 1st Runner-up with 7 wins (but a lower total spread than Thomson), while Brian PO got 6 wins.

Congratulations to all the winners, and we hope to see you in the Challenge next year!