The Hong Kong Scrabble Challenge, in its third edition now, is a flagship championship organised annually by the Hong Kong Scrabble Players Association (HKSPA). This WESPA-rated tournament serves as a platform for Hongkongers to challenge the better overseas players, hoping to bridge the gap between them in the near future. The Challenge consists of two one-day tournaments, namely the “Main” and “Extra” events, this year on 16 and 17 July 2017 respectively.

Welcoming Dinner for the Overseas Players

A Welcoming Dinner was held for our overseas guests the night before the Main tournament. 12 local and overseas players had a nice dinner at the Sang Kee Seafood Restaurant, which is in the MICHELIN Guide 2017 Hong Kong Macau. Michael McKenna, the World Youth Scrabble Champion 2012, also joined the dinner (but did not play in the tournaments thereafter due to other commitments). 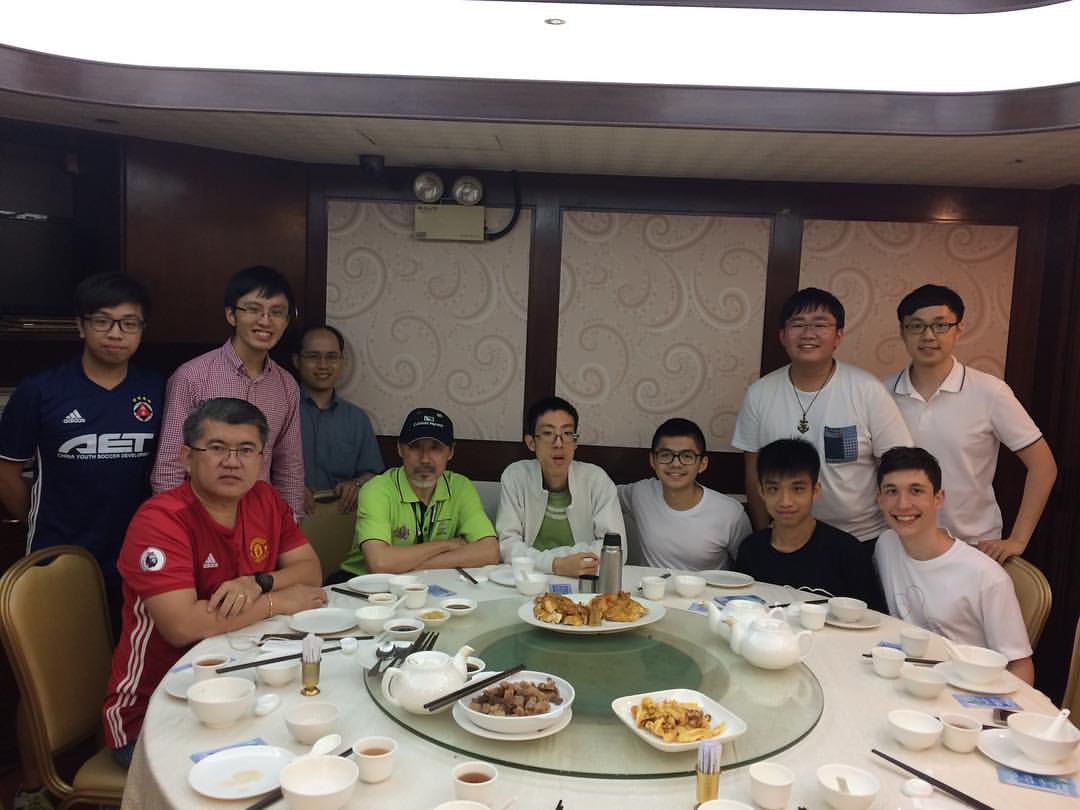 81 players from Hong Kong, Japan, Malaysia, Singapore and Thailand participated in the Main tournament on 16 July 2017. 8 games were played: the first 7 selected by Chew pairing (with rounds 2, 3, 4 and 6 lagged) and the last one by King-of-the-hill.

The tournament was attended by three Scrabble giants from Singapore - Hubert Wee, Michael Tang and Tony Sim, from whom their local opponents learnt a lot. The three Singaporeans, as expected, finished as the top 3. 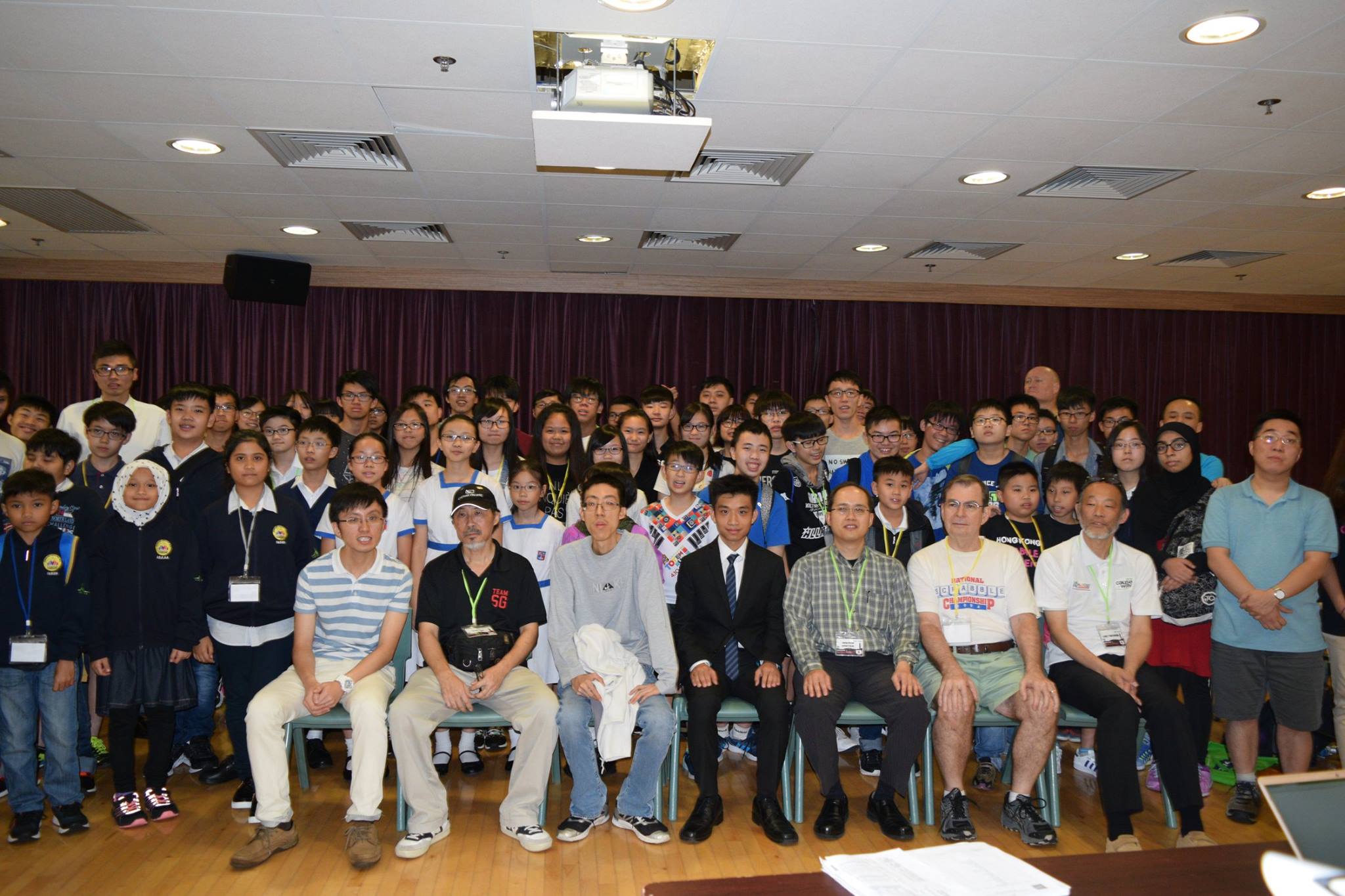 Also giving the locals a hard time were the top Japanese players - Isao Takemura, John Ozag and Warodom Geamsakul, who again met the 5 Hong Kong players they faced in the East Asian Scrabble Championship in Hiroshima this April. Warodom and Isao finished in top ten.

There were also some young faces from Malaysia and Thailand: 3 students from the Adventist International Mission School – Korat and 1 student from the Anglo International School – Korat in Thailand, and 6 students from the Cyberjaya Government Primary School in Malaysia. It is worth mentioning that Pranut Angsakul from Thailand finished 13th with 6 wins, and was both the Best Under-14 and Under-12 Player. The Malaysian kids also did well, having played numerous good games with the local students. 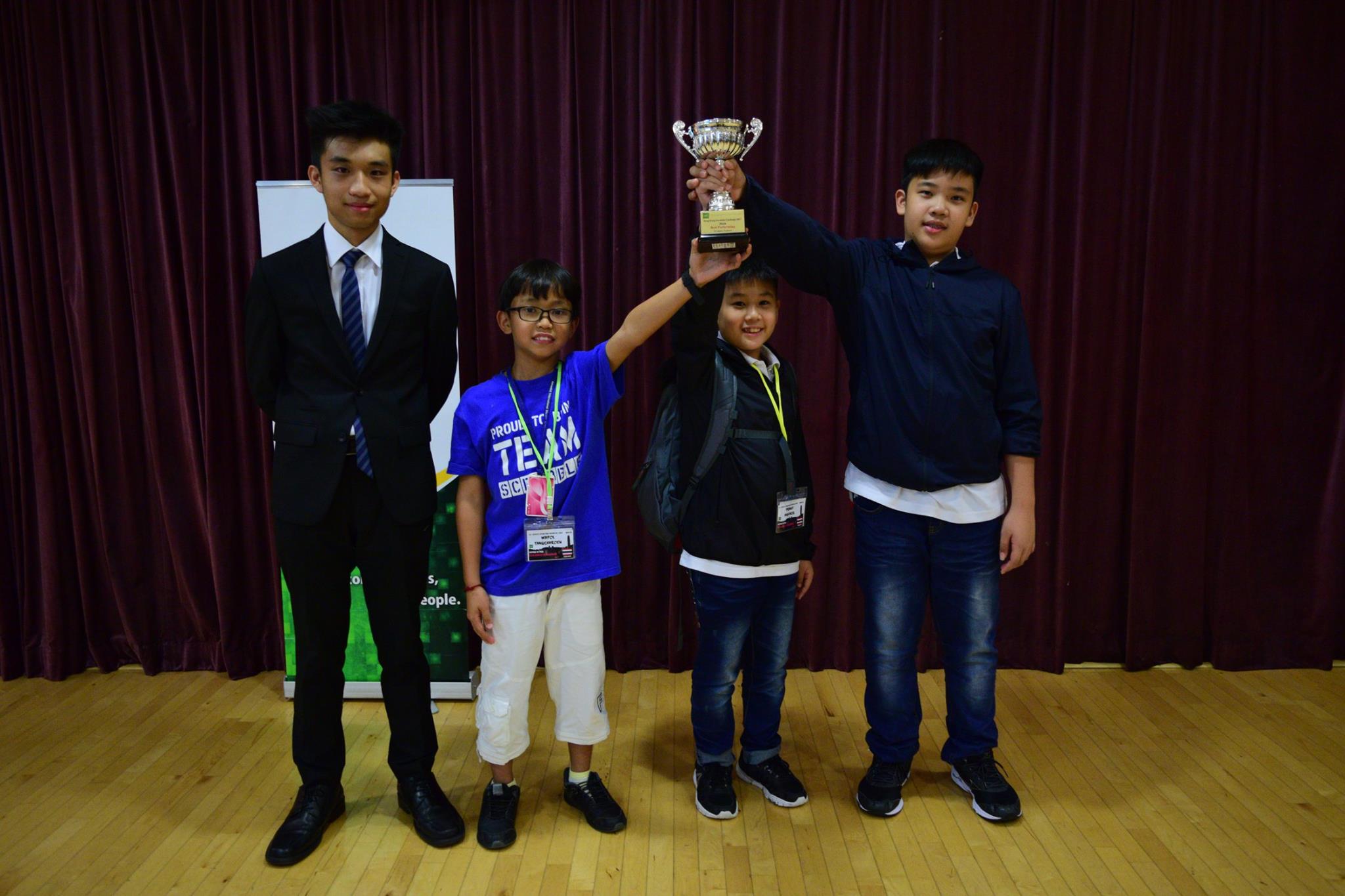 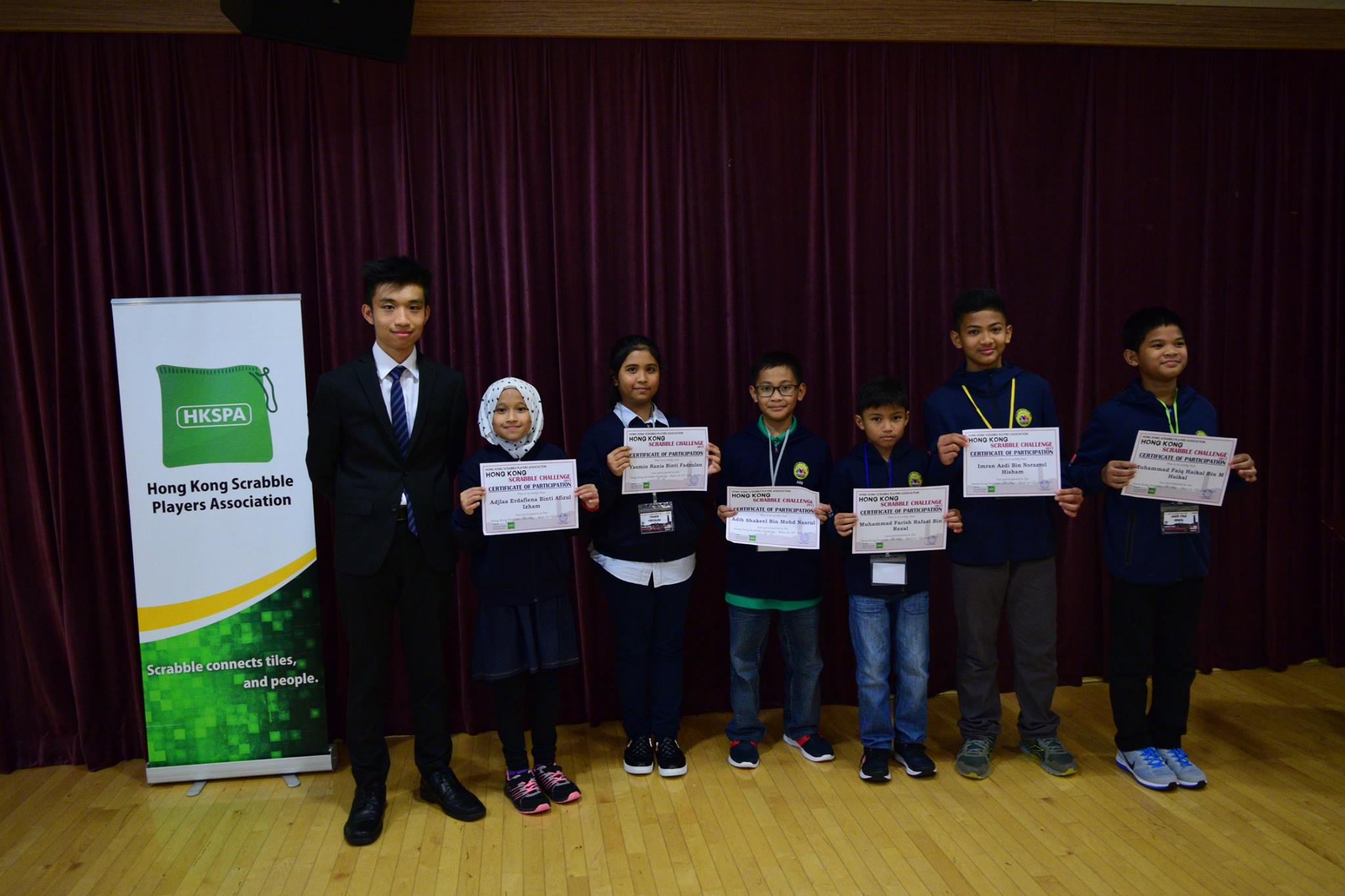 To bring the trophy home one must not lose a single game. Before the penultimate round it was clear that only 4 players still had chances of winning: Edwin Chan, Euclid Hui and Ho Chun Hung, all from Hong Kong, and Michael Tang. Upon Edwin Chan and Euclid Hui’s “elimination” from the championship fight, a de facto final between Ho Chun Hung and Michael Tang would decide the Champion. As Michael needed to catch his flight right after the game, the “final” was played before others could start their final game. Many spectated the fight before theirs. The last game was won, unsurprisingly, by Michael and with 8 wins and a spread of +1214, he was presented the Champion’s trophy with a round of applause from the assembled playing.

Hubert Wee got the 1st Runner-up while Tony Sim got the 2nd Runner-up. Euclid Hui ranked highest among the local players with a 4th place finish. Hubert also got the High Game with an impressive score of 729. Lai Cheuk Ying from the local school Ho Lap College (sponsored by Sik Sik Yuen) got the High Word by placing BARQUES with a score of 169.

The Tournament Director, Chris Lau, said after the tournament, “it was a great honour to direct the most international Scrabble tournament in Hong Kong so far. I would like to thank the tremendous work of my fellow Committee members and helpers in making this tournament a smooth and successful one. With so much interest from players of various levels, at least two divisions will be set up for next year’s event.” 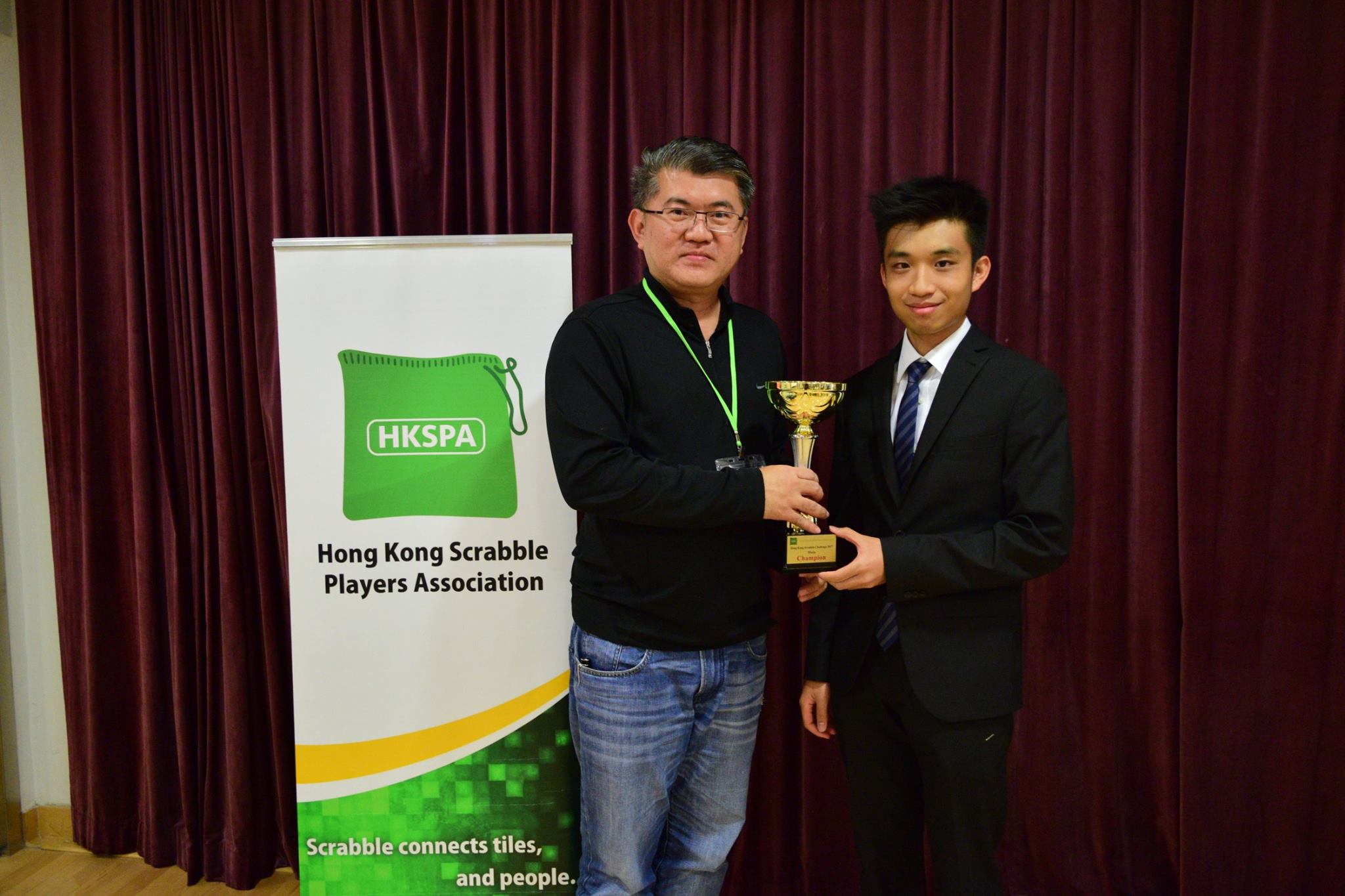 Congratulations to Michael Tang, the 2017 Champion

14 players from Hong Kong, Japan and Singapore competed in the Extra tournament, the format of which is the same as the Main one. Toh Weibin, who conducted a workshop in Hong Kong before the Challenge, played in the tournament and, to no-one’s great surprise, won it with 8 straight wins. Brian Po from Hong Kong came second while John Ozag from Japan came third.

Thank you all for coming to the Challenge, and we hope to see you again next year! Please feel free to give us any feedback on the tournament.

This article is also published on the website of WESPA: http://www.wespa.org/news/hkchallenge17.shtml